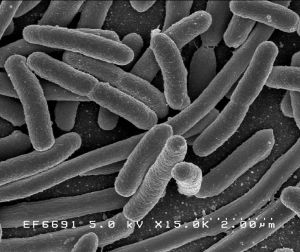 Here’s the write-up from out 13th chat with Mark Webber, a microbiologist who specialises in researching how bacteria resistance to antibiotics develops. Mark and his colleagues try to work out how to prevent resistance or develop new ways to treat infections. One theme they are interested in is the potential for biocides (disinfectants) to promote antibiotic resistance as bugs respond to both in similar ways.

Q: How does antibiotic resistance works?
A: That’s quite a big question, but simply a bug can become resistant to a drug by doing one of two things: either mutating DNA it already has or gaining new DNA from another bug (bacterial sex!). What these changes will do is either (1) alter the target structure of the antibiotics target (drugs target essential bits of the bugs machinery), (2) make an enzyme that destroys or alters the drug so it won’t bind the target, or (3) stop the drug getting to the target by making cell less permeable or pumping out the drug.

Q: And what’s the problem with antibiotic resistance?
A: Antibiotic resistance is a major, major problem across the world – we have no new drugs and bugs are gaining resistant to all the drugs we have (not all, but it’s getting worse). This challenges our ability to treat infections and many people now die from infections we used to be able to treat. Furthermore, antibiotics are key to many aspects of medicine: surgery, transplants, chemotherapy as well as treating immunosuppressed people and keeping them from being infected. This is why people are so worried.

Q: Does that mean we shouldn’t be using so many antibacterial wipes around the house?
A: Very good question – it is potentially possible that domestic use of antimicrobials can select for antibiotic resistant bugs but hard to quantify the risk of this. Personally I would suggest people should think about why they are using an antimicrobial – some places we need to kill bugs (toilets, sinks) but soap and bleach do the job!

Q: Does that mean antibacterial soaps and sprays that we use around the house are actually a bad thing?
A: We all carry more bacterial cells than our own (by miles!) and there are more bugs in your mouth right now than people who have ever lived for example – we don’t live in a sterile world and the vast majority of these bugs are harmless or helpful. I would however be careful regarding immunosuppressed people, as some of the ‘harmless’ bugs are not harmless when someone does not have normal immunity. It’s a question of what is needed. Basically if we can avoid adding things that stress bugs when we don’t need to, they are less likely to become resistant to things we don’t want them to.

Q: So what you are saying is, any kind of chemical stress we put bugs in (like anti-bacterial wipes, sprays or laundry additives) increases the chance of bugs developing antibiotic resistance? (Probably, but you can’t be sure)
A: Yes, in the lab if you expose bugs to biocides at low concentrations (as are seen in some domestic settings) you can make them antibiotic resistant. If anyone is really bored, we published something about this recently which you can read here. The next step is risk assessment i.e how often does this happen in practice and how much of a problem is it? It’s hard to get real world data, although there are some studies suggesting that the risk is real.

Q: Would you say the whole antibiotic resistance problem is going to be a bit like the global warming problem, in that unless everyone acknowledges it and makes lifestyle changes (and especially big business helps with this) then we’re doomed?
A: In some ways it is similar to global warming and not everyone does acknowledge the problem – solutions are not easy or likely in the very short term. There has been a recent emphasis on this problem and it is now getting much more attention and there is some hope regarding new drugs, but they will be a long way off. In the short term we can help by trying to use antimicrobials sensibly i.e. where they will have a benefit (you can for example buy antimicrobial chopsticks which seems to me to be a bit like a chocolate teapot!)

Q: Is it possible we could find ourselves almost back to where we were before penicillin was invented, where we have no effective antibiotics, and people die of really simple infections?
A: Yes this is the worst case scenario – we’re not there yet but we do have people infected with bugs we can’t treat which would not have been the case 20 years ago for example.

Q: Back to laundry sanitisers. Are they a good thing because they kill stuff when we can’t wash at high enough temperatures, or are they a bad thing because they are actually ineffective under normal wash conditions and/or encourage resistance?
A: For general laundry I would think it’s not needed. Detergents are pretty good at killing bugs and your clothes do not need to be sterile (you aren’t and you are going to wear them and cover them in your flora anyway). Nappies is an interesting one though as that’s one area you don’t want lots of bacteria to be present.

Q: Would bacteria survive on clean dry nappies for long if they were present?
A: This depends on the species, some bugs can survive for long periods on surfaces (months) but others will drop off fairly quickly (days) – bugs form what we call biofilms on surfaces where they stick to the surface and produce a cement and cover themselves in protective goo. Biofilms are incredibly hard to get rid of.

Q: It’s the dirty nappies that are the problem. We’ve heard a fair bit (previous chats) about lots of water changes being effective at flushing bacteria out. But there’s still that niggling thought of ALL THE BACTERIA.
A: I doubt you would ever get rid of ALL the bacteria, but you also may not need to, just reducing their numbers is probably helpful in terms of limiting irritation or possible infection.

Q: Most nappy users wash, dry, use, wash, dry, use, but there are people who store nappies for subsequent children and then the nappy libraries who do loans so those nappies won’t be used in that same frequent cycle of wash, dry, use.
A: Nappy libraries are interesting – one of the things that happens with newborns is that they establish their normal gut flora in the first couple of years of life. This is influenced by your environment (we think) and family members, but could potentially be impacted by ‘previous owners’ of a nappy. But I’m not sure if anyone has looked at this!

Q: Does it really matter if there are bacteria left in the nappies?
A: Again, it’s about context. Bugs are everywhere (phones and keyboards are covered) and as I say you have 10 times more bacterial cells than your own. This is mostly not a problem, but there are reasons why we cook food: again, it’s all about context. There’s an interesting project looking at the impact of the environment on babies flora which may be of interest to you.

Q: What about tea tree oil? There are mixed messages about that with nappy use; some people recommend it and others say not to use it because it causes resistance (and skin sensitivity, but I guess that’s a separate issue?)
A: There has been some concern about selection of resistance after tea tree oil exposure (as some similar things have been shown to do this). One study found it didn’t have much impact (here). One thing it is worth noting is that lots of antimicrobials are marketed as containing ‘natural antimicrobials’ with the implication that they will somehow be safer than ‘chemical’ antibiotics. Almost all our antibiotics are actually natural products or derived from them! I think people prefer to think of things as natural products, so it’s common sense to market products as such, but the reality is that most antibiotics are also naturally derived (bugs and fungi have been making them for billions of years to kill each other).

Q: If antibacterial products could lead to increased resistance, is there a chance that in future there’ll be more restrictions about what companies are allowed to sell for general use?
A: Yes (a bit), licensing laws have been changed for biocides to have to show that they do not select resistance. But the tests accepted are with very high concentrations and against bugs in liquid cultures in a lab where they are more susceptible than in reality. Also, concentrations in domestic use after dilution are often low. But there is some thought at least about this now.

Q: Is there any point to using things like Dettol laundry sanitiser? Or are manufacturers playing on parents’ insecurities?
A: Adding a sanitiser will kill more of the bacteria but most would be removed by detergents anyway so it will add some value but you are not going to achieve sterility anyway and the question is whether you need the extra reduction in bugs. In most circumstances I would think it adds little or no value in terms of health. It might be useful if washing at very low (15C) temperatures, while detergents work well at higher temperatures.

A big thank you to Mark for this insightful, fascinating (and slightly scary!) chat on the role of disinfectants in potentially increasing bacterial resistance!

One thought on “Live chat with microbiologist Mark Webber”