Cardiff Catalysis Institute were our partners in this project and they kindly did lots of lab tests for us, to help us investigate our HA mystery.
After discussion in the Facebook group, 3 experiments were chosen:

Our hypothesis is that HA forms microcrystals in solution. As the nappy dries, these tiny microcrystals stick to the nappy. As the nappy is worn and washed many times over, the microcrystals act as ‘nucleation points’ – tiny starter crystals that attract more and more HA to themselves. Crystals form much more easily on top of each other, than they do in isolation.

“In organic chemistry, if you have a compound [chemical] in solution [liquid], you would use equipment like a rotary evaporator [see lab tour video] to adjust the boiling temperature, and try to get rid of everything that wasn’t your compound of interest (i.e. HA). If that didn’t work, you would add an existing small amount of the compound (HA), and quite often it will just crash out immediately” says Jennifer from CCI.

Our problem nappies have various issues that we believe may be related to HA:

Result 1a: Nappy D definitely contains significant amounts of Hydroxyapatite, (chemical formula Ca₁₀(PO₄)₆(OH)₂). It is not struvite (magnesium ammonium phosphate).
These images show a progressive ‘zooming in’ using a Scanning Electron microscope (The first image is approx. 1mm x 1mm. There is a scale bar at the bottom right of each image). The bright spots are particularly big mineral deposits, there is also HA coating the fibres. Massive chunks of HA can be seen clinging to the fibres of the fabric. Jennifer (scientist at CCI) believes the white ‘sheen’ is a reflection within the microscope, rather than indicative that the entire fibre is coated.

Result 1b) Nappy D also contained significant amounts of Zinc, in an even distribution across the sample (purple image below).

(The other images show Phosphorus (light blue), oxygen (yellow), sodium (blue), potassium (green), zinc (purple), calcium (red). The large multi-coloured one is all of the others combined) 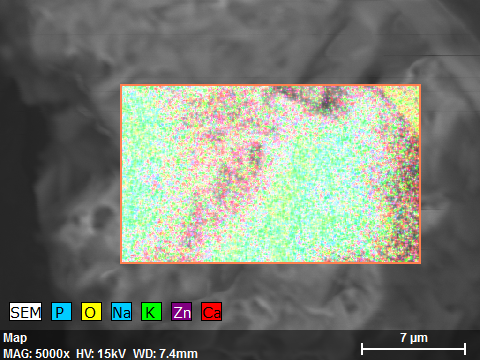 Research Question: How does water hardness affect the lab based synthesis of HA?

Hard water is caused by the presence of calcium carbonate (CaCO3).

In the laboratory, a conical flask was filled with water and a magnetic stirrer placed inside to agitate the water. Calcium carbonate was added to the flask and stirred for an hour until it was completely dissolved (calcium source). Phosphoric acid (phosphate source) was then added and the solution left for 48 hours.

In a separate experiment, the above steps were repeated, but this time with a small square of fabric nappy present in the water.

Phosphoric acid was added so that the phosphate was neither in excess, nor in limited supply – it was just exactly right for conversion to HA. The scientist did this by calculating what amount of phosphate would be needed to react with all of the calcium (stoichiometric volume). The aim was that no calcium carbonate or phosphoric acid would be left at the end of the process.

Result 2a) Hydroxyapatite was formed at the highest calcium concentration (350mg/L), as found in ultra-hard drinking water.

These experiments show that if you are not limited by phosphate, then you will spontaneously form HA in hard water when you wash things, without anything else needed.

Furthermore, if HA can form in hard water (350ppm of calcium) then it would definitely form when urine is present (~700ppm of calcium). Thus it appears that phosphate is the limiting factor. 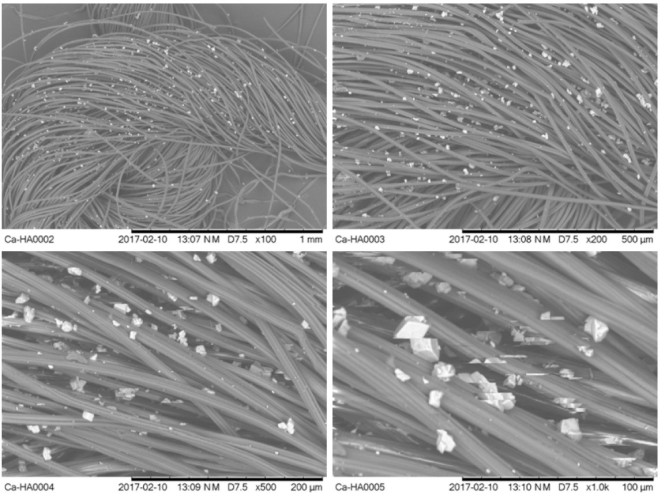 Result 2b) Lower calcium concentrations (i.e. softer water) resulted in the formation of calcium hydroxide (CaOH2) rather than hydroxyapatite. 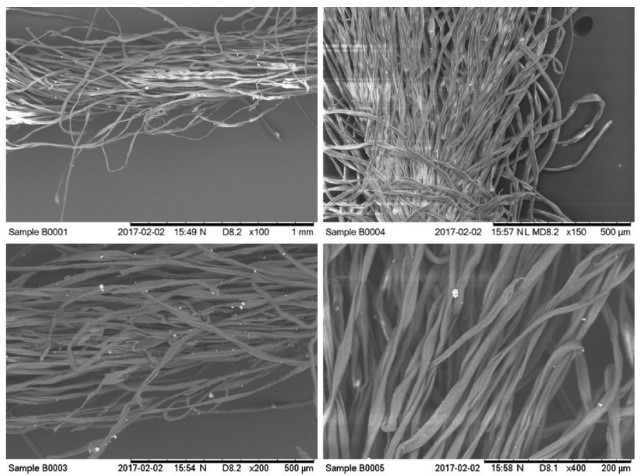 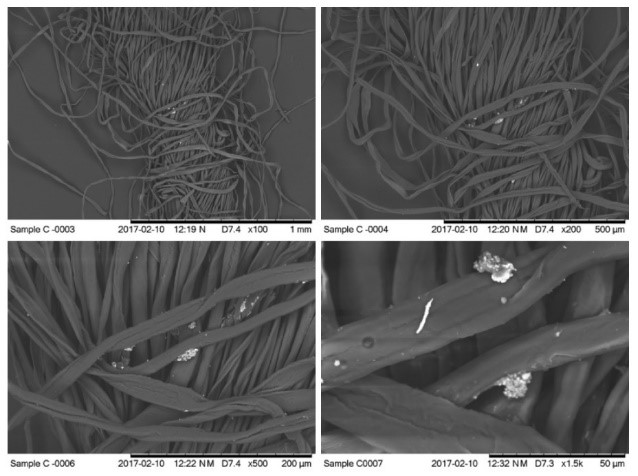 The formation of HA is probably limited by how much phosphate is around in the wash. Phosphate levels in drinking water are limited to 1.5mg/L – much lower than the amount of calcium.

Detergent expert Mark Smith told us in his live chat, that phosphates used to be used in domestic detergents as builders in formulations and to assist in water stability. However, they have now been banned in the EU due to their polluting affect on surface waters.
Mark estimates that the maximum permissible level in domestic detergents would give a concentration of about 0.01g of phosphate (PO4) per litre inside the washing machine. However, what’s in the average washing machine wash is probably more like 0.005g of phosphate per litre. (Phosphates are still sometimes used in commercial and industrial detergents in the EU)

Another potential source of phosphate is infant urine.  We don’t know at the moment how much phosphate is in infant wee or what could increase or decrease this.

Result 3 – Dip and Dry experiment: neither the samples dipped in urine, nor those dipped in detergent solution for 30 days (drying in between) contained any mineral build up.

Infant urine is known to contain significant amount of calcium and phosphates, so we wondered if exposure to urine could lead to HA formation. Volunteers dipped a new bamboo booster that we sent them in samples of infant urine for 30 days, letting it dry in between. They then washed it once in their washing machine, and sent it to CCI

Another set of volunteers dipped a new bamboo booster that we sent them in a solution of detergent for 30 days, letting it dry in between. They then washed it once in their washing machine, and sent it to CCI.

Unfortunately, neither experiment resulted in the formation of HA (but we thank our brave volunteers so very much for their efforts in such a smelly task!).
Samples were found to contain some other mineral particles – typically salt (NaCl) left over from washing, but unfortunately no HA.

We were assured that the student checked thoroughly – including both ends of the material sample just in case. 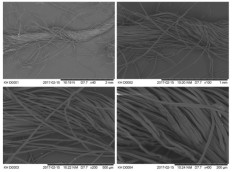 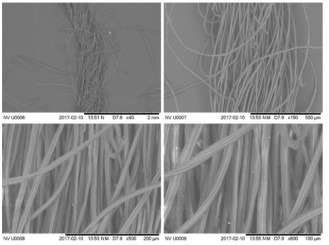 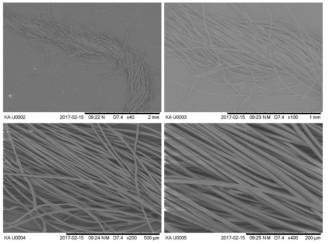 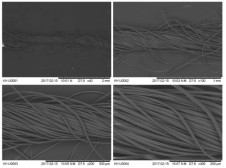 The results of these experiments has led to as many questions as there are answers. Science has a habit of doing that!

We would like to thank Cardiff Catalysis Institute for allowing us to use their time, energy and equipment to conduct these experiments. A special thank you to Dr Jennifer Edwards and her student Alex, who designed and ran these experiments, and prepared these images for our results day on 18th February 2017.  Further experiments are ongoing – we will post an update soon!

We would also like to thank all of our volunteers – especially those who donated a nappy, or took part in our dip and dry experiment (so sorry we didn’t find HA guys).
If this research gets published in a journal, you will all be listed as co-authors.